Upland City Council and Staff have been aware of and have taken steps to address the City’s rising pension costs and its unfunded accrued liabilities (UAL) with the California Public Employees’ Retirement System (“CalPERS”) for a number of years.

UAL - The unfunded accrued liability is the measure of the funding shortfall of each agency’s pension liability. The UAL is equal to the difference between:

1. Estimated value of benefits earned and expected to be paid to current employees and retirees in the future in today’s dollars; and

The City’s UAL as of its most recent actuarial report (June 30, 2020) is equal to $127 million. The city is required to make annual fixed dollar payments to pay down its UAL. UAL payment are calculated based on CalPERS discount rate of 7.0%, with payments totaling over $228 million over the next 22 years.

Some of the steps City Council has taken to address its UAL include: 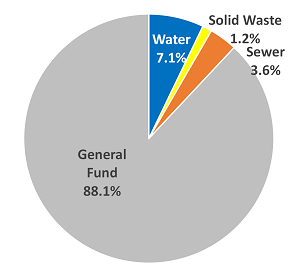 Due to legal constraints and concerns about market timing risk, the City decided to pursue alternatives to Pension Obligation Bonds. Working with its financial advisor, it developed multiple strategies to address its UAL.

The key to the BLAST Strategy is tapping into underutilized resources, primarily excess reserves in the City’s Water, Sewer & Solid Waste funds, which had a 12% share of the UAL ($15.3 million).

There are 5 component parts to the BLAST strategy:

Issuing bonds for capital projects enable the Water Fund to utilize its previously designated reserves to make investment in or internal loan to the General Fund.

3. ADP – The City made an Additional Discretionary Payment (ADP) from monies held in the Section 115 Pension Trust to “pre-pay” $10 million of its UAL – saving $19.6 million in total UAL payments.

4. Savings – The City Council adopted a formal Pension Funding Policy, which requires 50% of budgetary savings realized from the BLAST strategy to be deposited into the Section 115 Pension Trust, which will be available to address future increases to the UAL.

5. Transfer – The Water, Sewer & Solid Waste fund reserves transferred $15.3 million from its reserves to CalPERS to pay off their share (12.9%) of the City’s UAL. 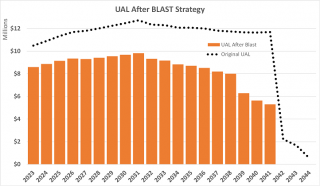 After City Council approval, implementation of the strategy commenced in December 2021 and was complete by the Spring of 2022 - taking 120 days to complete. The BLAST Strategy will save the city $66.8 million in UAL payments over the next 22 years, and lowering its annual UAL payment by $3-4 million, all without the use of taxable Pension Obligation Bonds (POBs).