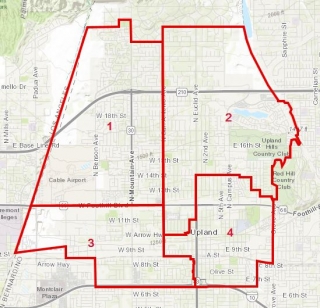 On December 22, 2015, the City received a letter alleging that the City’s at-large elections are a violation of the California Voting Rights Act (CVRA) due to the presence of racially polarized voting (RPV), which impairs the ability of minority citizens to elect the candidate of their choice to the City Council. After review and research of the allegations contained in the letter, as well as consideration of the City’s options, the City entered into an Agreement, pursuant to which it agreed to place a district-based voting ballot measure on the November 8, 2016 ballot. The City also agreed to approve and adopt one district map plan from the proposed draft plans no later than August 1, 2016.

Pursuant to the Agreement, the City entered into an agreement with Compass Demographics to direct the process of creating districts. In consultation with David Ely, principal of Compass Demographics, staff designed a community participation plan to gather input on council member voting district boundaries, which the City Council adopted during a public hearing on April 11, 2016. Pursuant to that plan, staff and Mr. Ely conducted community outreach, received input from the public, and prepared maps in accordance with the California Voting Rights Act (CVRA) and the public’s input. Several community meetings were held to discuss the concept and impact of district-based voting. Those in attendance learned about the State & Federal requirements for creating districts, had an opportunity to draw district boundaries, and provide input in the process.

During the July 11, 2016 meeting, the City Council received a presentation from Mr. Ely and staff, as well as public input, regarding three draft voting district maps. After the presentation and the public hearing, the City Council discussed the three draft voting district maps and then indicated its preference for Draft Map 3, which provides for division of the City into four (4) council member districts in a manner consistent with the Federal Voting Rights Act (FVRA), the CVRA and the Agreement. The City Council further requested that staff explore the possibility of adopting an ordinance establishing by-district elections rather than placing a measure on the November 8, 2016 ballot. On August 8th, 2016, the City Council adopted Ordinance No. 1909 to establish By-District Election of four council members and establishing the boundaries of each council district.

To see which district you live in click here.  If you have any questions about this issue, please send an email to UplandCityClerk@ci.upland.ca.us, or call the City Clerk’s office at (909) 931-4120