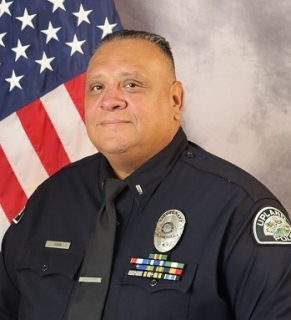 Lieutenant Duran began his career with the Upland Police Department in March of 2004. In 2007, he was selected as a Field Training Officer and trained numerous new officers until January of 2013, when he promoted to Detective. As a detective, he investigated domestic violence, sexual assaults, crimes against children, and crimes against persons. He monitored parolees, probationers, and sex offender registrants. He was also the department’s liaison with the Los Angeles Internet Crimes Against Children (ICAC) Task Force.

Moe promoted to Sergeant in January of 2016, where he worked as a field supervisor, watch commander, Personnel & Training, internal affairs, CERT Liaison, and Traffic Supervisor. Additionally, he has served as a member and team leader on the department’s SMASH Team, Mobile Field Force, Crisis Negotiations Team, Social Media Team, and Honor Guard.

Moe is a United Stated Marine Corps Veteran. He served from 1985-1991 and deployed to the middle east during Operations Desert Shield and Desert Storm. His formal education includes a bachelor’s degree in Criminal Justice with a minor in Sociology from Chapman University and a Master of Business for Veterans degree from the University of Southern California. Moe is also a graduate of the Sherman Block Leadership Institute (Class 434).