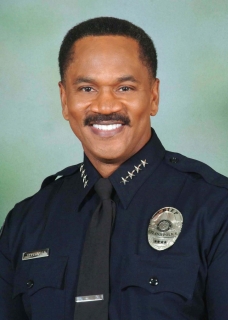 Darren Goodman was appointed Chief of Police for the City of Upland Police Department on July 16, 2018.  Prior to assuming the role of Chief for the Upland Police Department, he was a Captain for the San Bernardino Sheriff’s Department (SBSD), where he retired after nearly 27 years. During his tenure with the SBSD, he was the commander of the Frank Bland Regional Training Center, and most recently, the Police Chief for the Chino Hills Police Department; a full service, mid-size police department east of Los Angeles that contracts its police services with the San Bernardino County Sheriff’s Department.  Chief Goodman’s commitment to data driven policing principles, civic partnerships, and community engagement have earned him a reputation of a results-oriented leader.  Chief Goodman implemented a holistic approach to addressing crime and quality of life issues within the City of Chino Hills by reducing gaps between police specific services and other service providers dedicated to public safety such as public works, code enforcement, mental health services, and homeless advocates. A strong advocate of community policing, Chief Goodman regularly facilitates community forums to engage citizens and increase stakeholder inclusion.

Chief Goodman began his law enforcement career as a Deputy with the San Bernardino County Sheriff’s Department in 1991.  During his 27-year career with the department, he has worked a variety of assignments, including Corrections, Patrol, Narcotics, Emergency Operations, Regional Gang Enforcement, Fugitive Apprehension, and SWAT.  In 2013, he assumed command of the Sheriff’s Regional Training Center, where he was responsible for managing all of the Peace Officers Standards and Training mandates for the department’s sworn officers, which included firearms, emergency vehicle operations, and basic academy training.  He was also responsible for curriculum development and delivery for professional training of the department’s sworn officers, civilian staff, and many police agencies throughout the region.

On May 10, 2018, Chief Goodman completed his Doctoral studies in Organizational Change and Leadership at the University of Southern California’s Rossier School of Education. Chief Goodman also earned a Master’s Degree in Public Administration from the University of Southern California’s Price School of Public Policy, which was ranked #2 in the nation by US News & World Report (2018).  In 2015, Chief Goodman graduated from prestigious Harvard University’s Kennedy School of Government, Senior Executives in State and Local Government.  Chief Goodman graduated from the esteemed Naval Postgraduate School’s Center for Homeland Defense and Security in 2017; he graduated POST Command College Class #62, in 2018; and serves as an Adjunct-Professor at the California State University San Bernardino.

Chief Goodman holds numerous professional certifications and memberships, including but not limited to, Peace Officer’s Standards and Training (POST) Management Certificate, the University of Southern California Public Safety Leadership Program; and, Role of the Police Chief.  He is a member of the American Society for Public Administrators, the Graduate Policy and Administration Community at USC, the International Association of Chiefs of Police, and California Chiefs of Police.

Chief Goodman lives in Riverside, California with his wife Shana, who is a Doctor of Nursing Practice with a background in pediatric intensive care treatment.  Their blended family includes four children.